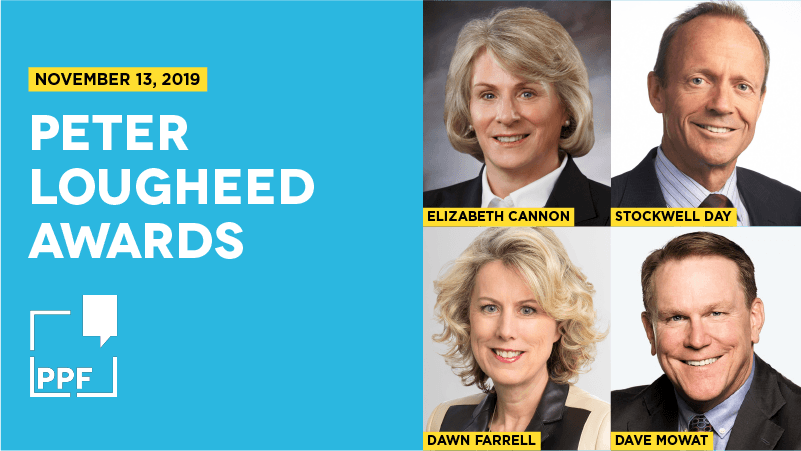 On Nov. 13, join us at our Western Dinner in Calgary to honour Elizabeth Cannon, Stockwell Day, Dawn Farrell & Dave Mowat. Tickets are on sale now.

At PPF’s 2019 Western Dinner, the Peter Lougheed Award for Leadership in Public Policy will be presented to four exceptional Western Canadians who have dedicated their careers to leadership and advancing public policy in the region and across Canada.

Congratulations to Elizabeth Cannon, Stockwell Day, Dawn Farrell and Dave Mowat. Join us to celebrate them in Calgary on Nov. 13. Tables and tickets are on sale now.

Reserve your seat or table today 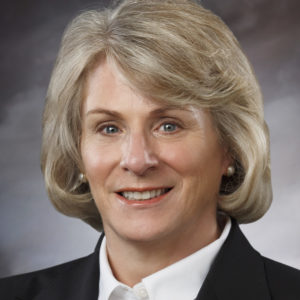 Dr. Cannon’s research has been at the centre of global positioning systems (GPS) in both industrial and academic settings, and she has commercialized technology to over 200 agencies worldwide. Among her many accolades, she is a member of the Royal Society of Canada and in 2006 she was named one of Canada’s Top 100 Most Powerful Women by the Women’s Executive Network. 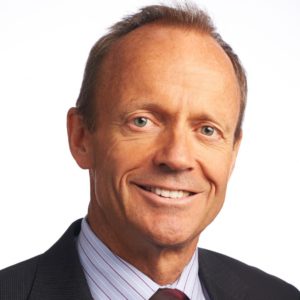 For more than 25 years, Stockwell Day served in high-profile positions in federal, provincial and municipal politics and policy, most notably as Leader of the Official Opposition in Ottawa. As a federal cabinet minister, he oversaw Public Safety, International Trade, and was President of Treasury Board. In Alberta, his senior portfolios included treasury and labour. Mr. Day also chaired the committee of provincial ministers who negotiated with the federal government on changes to the national child benefit program.

After retiring from elected office, Mr. Day joined Canadian law firm McMillan LLP as a senior strategic advisor, where he is helping public, private and not-for-profit clients across industries in Canada, the United States and internationally. 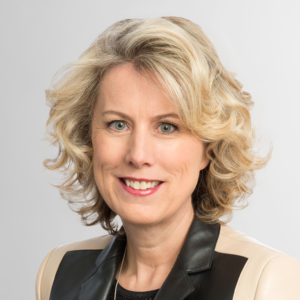 Dawn Farrell, the President and Chief Executive Officer of TransAlta Corporation in Calgary since 2012, has more than 30 years of experience in the electric energy industry. In her senior roles at TransAlta and BC Hydro, Mrs. Farrell has shown strong leadership on clean energy transformation, Indigenous relations, generation and many other key aspects of the energy sector.

Mrs. Farrell sits on the board of directors of The Chemours Company, The Conference Board of Canada and the Business Council of Canada, and served previously on many boards, including at the Calgary Stampede and Mount Royal College. She is a graduate of the University of Calgary. 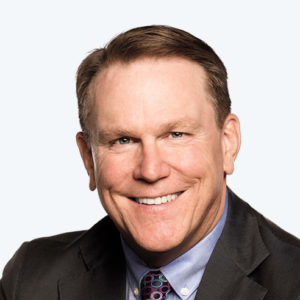 Dave Mowat is the former President and Chief Executive Officer of ATB Financial, the largest provincially based financial institution in Alberta. Under his leadership, ATB became a leader in technology and customer experience across the banking sector, including being the first financial institution in Canada to make a cross-border payment using blockchain technology. In 2016, he led Alberta’s Royalty Review panel, which recommended a new approach to Alberta’s oil and natural gas royalty structure. Since retiring from ATB, Mr. Mowat has become involved in several boards such as TELUS, Alberta Blue Cross and the Citadel Theatre in Edmonton.

Join us in Calgary on Nov. 13 to celebrate these exemplary and inspiring leaders at PPF’s 2019 Western Dinner. Tables, tickets and partnership opportunities are available now.

Reserve your seat or table today

Thank you to our sponsors:

Thursday April 2, 2020
Whatever one’s view of the oil industry, we will all be better served by an orderly transition over the current chaos. Oil's implosion in provinces such as Newfoundland, Saskatchewan & Alberta is forcing a 30 year transition in 30 days, and PPF President & CEO Edward Greenspon says we need to be strategic in leveraging the current crisis to stimulate economic activity while addressing climate change.
Read what an orderly process could look like
Article

Tuesday March 17, 2020
In a message to the PPF community, our President & CEO Edward Greenspon addresses how PPF is re-calibrating and conceiving of new forms of digital engagement.
Read more
Article

Thursday February 13, 2020
In the sixth edition of our Atlantic Newsletter, our latest report explores how is Atlantic Canada working to retain international students and our Skills Next series looks at what Canadians will need to succeed with the changing nature of work. Plus: a sneak peak at upcoming reports on Atlantic growth & save the date for the 2020 Atlantic Immigration and Revitalization Summit and Frank McKenna Awards Dinner.
Read our Atlantic newsletter #6
Back to top