In one of Canada’s coastal provinces, a concerted effort is underway to determine exactly how the impacts of a rapidly warming climate can be mitigated by the largest carbon sink on the planet: the ocean.

The scientists, entrepreneurs and academics behind this push say their work is long overdue. They also believe it is ready to thrust Canada’s East Coast into the forefront of the global struggle to understand and manage climate change.

Nova Scotia sits on the edge of the Northwest Atlantic, an essential carbon sink and a key focus of Canada’s Ocean Supercluster. That industry-led, pan-Canadian network launched by the federal government in 2018, serves as a hub for industry, tech and academia to pursue marine research and development.

With one of the highest concentrations of ocean-related PhDs in the world, Nova Scotia is home to more than 600 scientists, engineers and technicians working in this field.

The province also hosts the Ocean Frontier Institute (OFI), a partnership established in 2016 between Dalhousie University, Memorial University of Newfoundland and the University of Prince Edward Island. The institute brings together researchers, industry and government to tackle complex ocean problems, with research focused on the changing dynamics in the North Atlantic.

As OFI’s Scientific Director and CEO, Dr. Anya Waite is at the forefront of this quest for knowledge, working at the intersection of climate and ocean science.

Sending carbon to the seafloor

With the ocean absorbing more carbon from the atmosphere than all the world’s rainforests combined, Waite laments that it has been missing from the climate change conversation.

“Despite the enormous role the deep ocean plays in carbon absorption, it is severely understudied,” she said.

The ocean absorbs carbon in a variety of ways. Researchers best understand the coastal absorption system, which works through seagrass, meadows and salt marshes. Carbon is captured through photosynthesis in those ecosystems and then stored in root systems beneath the seafloor.

But Waite says the deep ocean absorbs 20 to 50 times as much carbon as the coastal ocean. This happens in two ways, through processes that researchers call the chemical carbon pump and the biological carbon pump.

Chemically, carbon dioxide dissolves into the water. Through crashing waves and cooling water temperatures, carbon is absorbed in the sea water. As surface water moves down into the deep sea, it carries carbon with it.

Biologically, phytoplankton grow and absorb carbon through photosynthesis before being eaten by zooplankton. Particles called marine snow then drift to the bottom of the ocean.

Both pumps can help to store carbon for thousands of years.

The North Atlantic absorbs about a third of the carbon captured by the world’s oceans because of the intensity of its chemical and biological pumps. This ocean has one of the strongest spring phytoplankton blooms in the world and an intense chemical pump, where pillars of water sink to the deep sea, taking carbon down with them. The result is rapid carbon accumulation.

Without accurate data measuring the ocean’s role in absorbing and storing carbon, reaching current climate targets is next to impossible. Waite cautions that changes in the ocean’s carbon-absorbing potential could swamp any progress made on land, the focus of most climate change efforts.

“You can’t not mention the ocean and actually talk seriously about climate change,” she said.

While scientists have long been aware the ocean is understudied, policymakers and the public have concentrated climate action on land-based activities such as planting trees, switching to electric vehicles and finding alternative energy sources to fossil fuels.

Meanwhile, Waite observes, the open ocean is the biggest force controlling climate change, and the deep sea “by far the biggest carbon sink in the world.”

Although the oceans’ role in carbon absorption has been studied for the past 50 years, Waite says understanding that process is different from measuring the rate of carbon intake.

The research question involves understanding how things grow and how they sink, she notes, while the observation question is “How do we, over the long term, observe changes in these systems?”

Those system changes need to be quantified so they can be factored into the calculations made by the policymakers and researchers occupied with setting and meeting climate change goals.

The concept of measuring carbon sequestration has generated several ideas around how to store more carbon underwater. As humans introduce new technologies to help the ocean do this, both the intended and unintended consequences of these interventions need to be observed, recorded and understood.

Eric Siegel, Chief Innovation Officer at OFI, points out that in some instances we know what we don’t know.

For example, kelp forests can be an effective way of pulling carbon out of the atmosphere. Large amounts of kelp can be grown to absorb carbon, before the plants are pulled to the bottom of the ocean where they die, leaving the carbon on the seafloor. However, what these large amounts of kelp will do to the deep sea ecosystem is not yet known.

The link to industry

Siegel is also Executive in Residence at the Creative Destruction Lab (CDL) in Halifax. The Oceans Stream and Ocean Startup Project at CDL-Atlantic foster collaboration between ocean research scientists and investors, entrepreneurs and businesses who can benefit from their expertise.

Unlike fields such as agriculture, computer engineering and chemistry, where research has been funnelled into industrial applications, Siegel notes that the ocean sector has remained more siloed.

OFI has supported CDL-Atlantic in creating a space where research and industry can collaborate on complex ocean challenges. Here, startup companies work with scientific and business mentors to “sharpen objectives, prioritize time and resources, raise capital, and engage with experts working on the frontiers of research,” according to the CDL website.

Siegel helps to evaluate companies at CDL, which supports those showing promise to attract talent,capital and to scale up. Primarily he helps bring OFI scientists to CDL, who act as mentors to guide the new entrepreneurs.

Planetary Technologies was one of those promising companies.

A cutting-edge climate tech startup based in Dartmouth, N.S., Planetary Technologies benefited from support provided by the Oceans Stream at CDL-Atlantic.

The company is redeveloping carbon removal technology, taking carbon directly out of the air and using seawater chemistry to store it safely.

Jason Vallis, Vice-President of External Relations, believes carbon absorption needs to be seriously considered as part of the solution from the outset. There’s a “moral dilemma argument” occurring, with some maintaining that decarbonization should be the focus before turning to carbon absorption.

And, like Waite, Vallis wants the ocean to be front and centre in the conversation. “It’s probably the biggest lever in the fight against climate change,” he said.

As the ocean absorbs carbon and heat from the atmosphere, it becomes warmer and more acidic.

“The ocean has been doing all the heavy lifting for us,” Vallis said. “ [Climate change] is having a devastating impact, as far as we understand, on marine life and biodiversity, so there is an obligation to do something.”

Planetary Technologies has developed the Accelerated Carbon Transition (ACT) Platform, which it claims will:

Vallis likens the technology to giving the ocean an antacid. The company aims to correct and restore the ocean’s delicate pH balance by producing a form of pure alkalinity, converting that into a carbonate that remains locked within ocean chemistry.

“This is where the carbon will end up on its own,” he said. “Our process simply speeds that up.”

One challenge has been to remove carbon without creating more carbon in the process. When produced the traditional way, the company’s preferred form of alkalinity – magnesium hydroxide – emits more carbon than would be captured. Planetary Technologies has redesigned the process to avoid using heat and to consume existing abundant mine waste, creating much less carbon along the way.

The company expects to remove a billion tonnes of carbon dioxide from the atmosphere by 2035.

The Ocean is Missing

Work done at OFI has had regional, national and international reach. This has included helping Fisheries and Oceans Canada delineate conservation priorities for the development of a marine protected area in Atlantic Canada, predicting marine conditions and providing real-time location of endangered North Atlantic right whales for Transport Canada and the Fisheries Department.

Now, OFI is looking at the agreement signed at the UN Climate Change Conference in 2015. At COP21 in Paris, 196 governments agreed to work to keep the world’s average temperature from rising 2 degrees above pre-industrial levels, and preferably below 1.5 C.

“There’s a gap in the Paris Agreement, which is the deep blue ocean, deep blue carbon, where no nation is responsible for observing that sink even though it is the biggest sink in the world,” she said.

Waite notes that this changed at COP26 in Glasgow. A concerted effort was made at the 2021 conference to raise awareness around the ocean’s role with the campaign “The Ocean is Missing: What we don’t know can hurt us.”

“The important message we’re trying to bring to policymakers is that we need to observe the deep blue ocean much better than we have in the past,” she said.

Siegel believes some success has been achieved in getting policymakers to understand the ocean is absent from climate discussions. He sees the next challenge as “how we can link up within Canada and internationally to make measurements to inform policymakers on the next steps.”

Vallis hails an OFI conference held in May, Ocean Frontier 2022, as a major turning point. Being able to gather thought leaders, advocacy groups and others working in the ocean sector in one room signalled that the issue was gaining traction.

But to make meaningful change, Waite believes nations need to combine efforts. Understanding the ocean is too big a task for any one country to assume on its own.

“What we are recommending as government policy is a step change in the scale of ocean observation in order to resolve the changes that are happening now and predict what’s going to happen in the future,” she said.

Waite, Seigel and Vallis all believe Canada is on the right track to bring the ocean into the climate change conversation. They feel hopeful about the future as they work in different streams toward similar goals.

Seigel envisions Atlantic Canada as the catalyst for that future.

“We are going to be world leaders, using the ocean and technology to solve global climate issues,” he said. 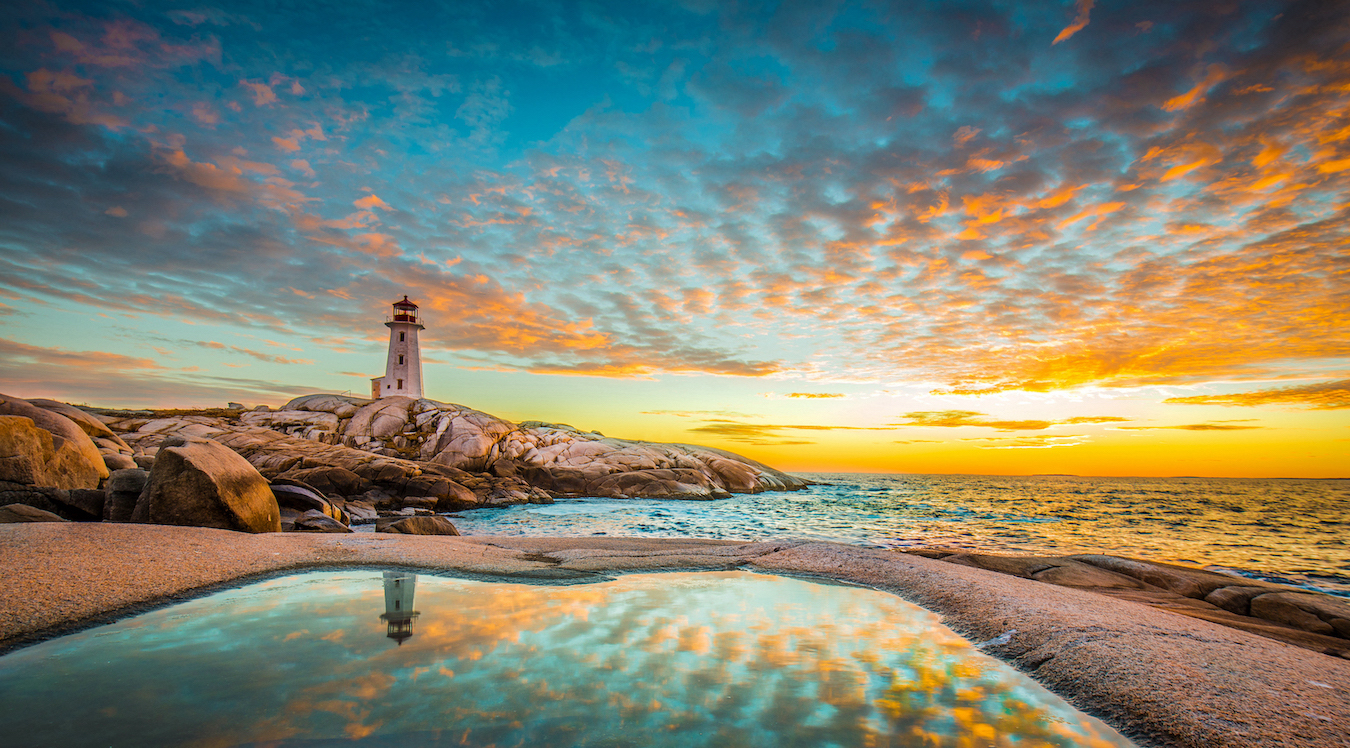 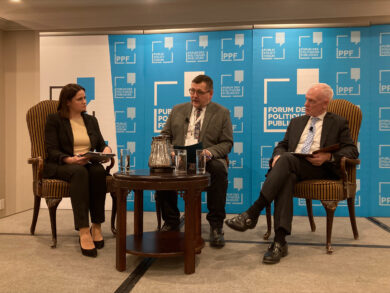 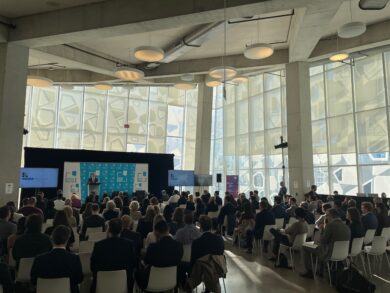 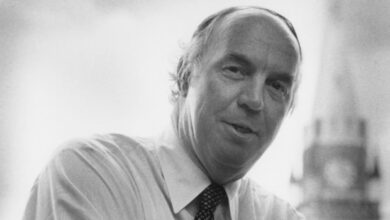