These cases show some of the myriad forms of online communication that may be considered harmful. These include forms of speech that are already illegal in Canada (e.g., uttering threats), instances of harmful but not illegal communication (e.g., anti-Muslim posts that don’t reach the threshold of criminal hate propaganda) and harmful patterns of communication that contribute to systemic discrimination (e.g., large volumes of dismissive and disrespectful communication toward women).

In this report we propose a framework to distinguish key dimensions of harmful online communication in Canada. We summarize initial findings from our study of online abuse of political candidates in the 2019 federal election, which emphasizes how patterns of discourse and interactions between online and offline experiences may be harmful. We then analyze international policy responses by governments and social media companies. We conclude with several principles to guide policy development in Canada: 1) focus on systemic processes rather than individual pieces of content; 2) pay attention to the people who perpetrate, suffer and address harm and not just to online spaces; and 3) promote public accountability – including, but not limited to, transparency – of regulators and platform companies. Although our report focuses on the negative impacts of online communications, we should not forget the potential benefits, including how social groups and political actors leverage these spaces for democratic purposes. Indeed, addressing harmful communication can promote a more just distribution of the benefits of internet use. 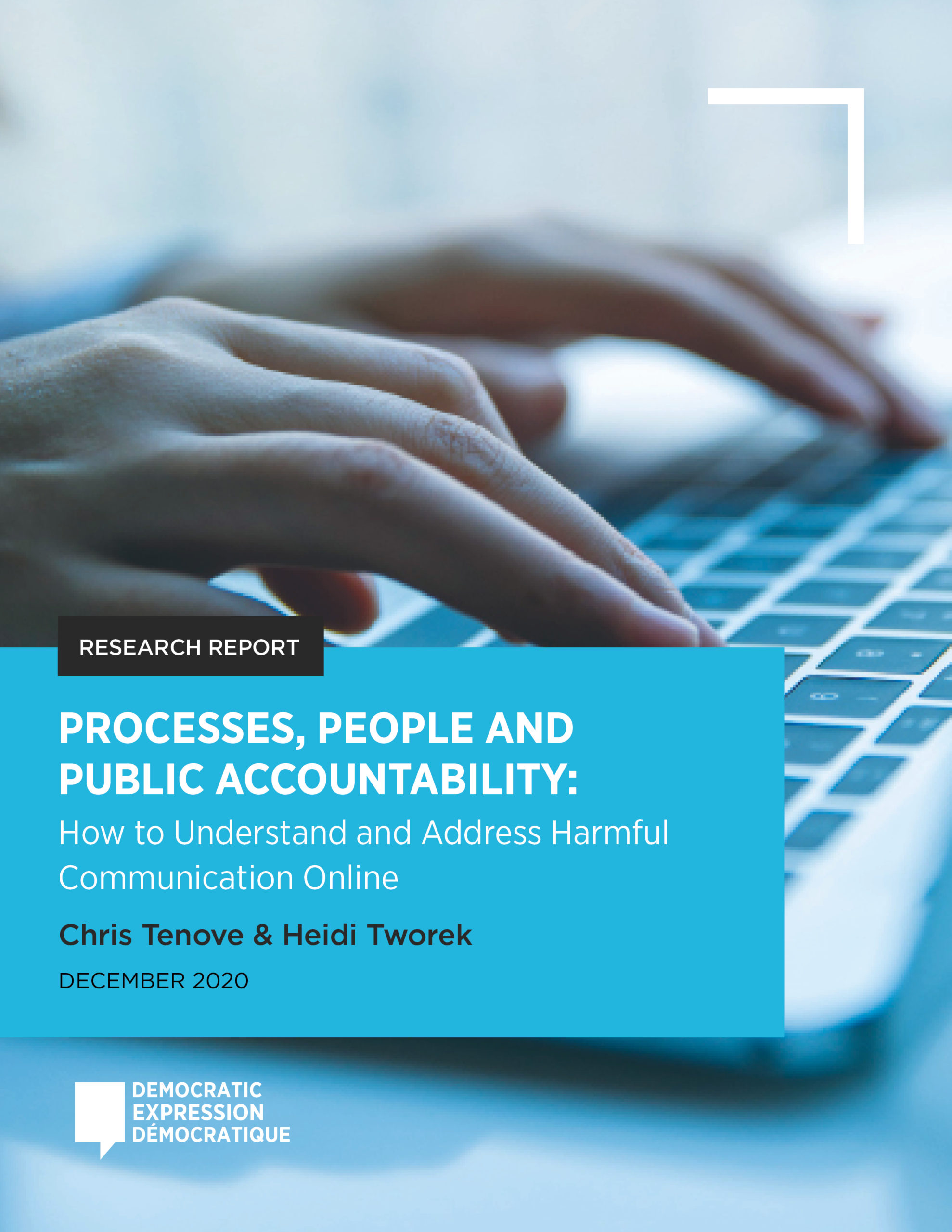 Processes, People and Public Accountability: How to Understand and Address Harmful Communication Online
Download PDF
About the Authors

Dr. Chris Tenove is a Postdoctoral Fellow in the Department of Political Science at the University of British Columbia. He researches democratic theory, international relations and public policy, with a focus on digital media. He has published peer-reviewed articles, book chapters and policy reports on cyber-security threats, harmful speech and disinformation, and their impacts on democracy and human rights. Together with Heidi Tworek, he leads an in-depth study of the online abuse of Canadian politicians. Tenove previously worked as an award-winning journalist and broadcaster.

Dr. Heidi Tworek is Associate Professor in Public Policy and International History at the University of British Columbia, Vancouver. Tworek has advised and testified before governments around the world on social media, hate speech, and democracy. She is the award-winning author of News from Germany: The Competition to Control World Communications, 1900-1945 (2019) as well as many journal articles and book chapters. Her writing has appeared in English and German in outlets such as Washington Post, The Atlantic, Globe & Mail, Frankfurter Allgemeine Zeitung, and Foreign Affairs. She is a non-resident fellow at the German Marshall Fund of the United States and Canadian Global Affairs Institute as well as a Senior Fellow at the Centre for International Governance Innovation.